Genetic predisposition on where fat is stored, as well as changes in the breasts after pregnancies and breastfeeding may be reasons that women had breast augmentation surgery with implants.

The average lifespan of an implant is ten years. The body reacts to a foreign body (implant) by making scar tissue around the implant, which may cause rippling, depressions, and implant position changes. Insurance companies do not cover cosmetic breast augmentation.

A bag made of a silicone shell filled with saline.

A bag made of a silicone shell filled with cohesive silicone gel. Silicone implants require monitoring with a magnetic resonance imaging test for rupture. Insurance companies usually do not cover this MRI if the implant was placed for cosmetic reasons.

The following photograph is of a woman that had bilateral cosmetic breast augmentation with implants. She had failure of the left implant, that was removed due to an infection, resulting in a scarred down left breast. The patient presented to Dr. Vasile with a goal of restoring the left breast with the most natural reconstruction, using her own fat. She also wanted the right implant removed from her body.

Below is the preoperative photo. 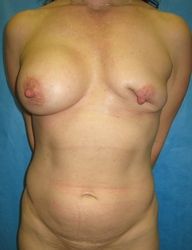 Below is a postoperative photograph 3 months after reconstruction of the left breast with a DIEP flap, removal of the right breast implant and placement of a right breast DIEP flap. The abdominal scar will fade more at 1 year, and is cosmetically similar to a tummy tuck (abdominoplasty). 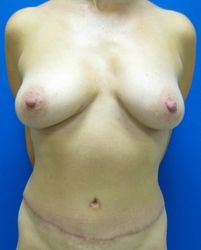